Whew! It’s over – over three months of preparation went into a mere six shows, but the Footprint Theatre production of Arsenic and Old Lace is now all over. It went really well, and I think (though I say it myself) that it went much better than it had any right to, considering that it was my first ever attempt at directing a full-length play.

Here’s a photo of the cast on the set: 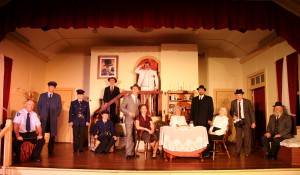 The cast of Footprint Theatre’s “Arsenic and Old Lace” on stage.

We staged the show in the Pambula Town Hall. This is an old hall, with a wing-less stage. There is a supper room directly behind the stage, with two doors leading onto the stage through the back wall. A passageway was added onto the hall a few years ago; a window and double door at stage left used to lead directly to the outside of the hall, but now lead into the passageway, which links the supper room, stage and main hall.

We were not permitted to attach anything to the walls or the stage, which made set construction a challenge. In the end I decided we would simply use the whole stage – all the way to the back and right out to both sides – and incorporate the actual windows and doors of the building into the set. We built the structure you see in the middle of the stage around a one-metre-high staging element 2.4 metres long and 1.2 metres deep; it is basically a box 3.4 metres high with a  door in the front, a narrow (60cm wide) staircase and a short “balcony” leading up to the door. We painted everything in the same colours as the walls around the stage, and the result was spectacular – it really looked as if the stage was a room in a house.

Lighting was a challenge. We had hoped to get lighting bars installed before the first night, but in the end we had to make do with two lighting stands about 5 metres in front of the stage. at full extension these raised the lights only about 3metres into the air, so the lights were shining pretty much horizontally into the stage space. This flattened everything rather much, which was a shame, but at least people could see the action.

Lighting was further complicated by the fact that the hall has no curtains over the fourteen huge windows into the main hall, nine of which are almost two metres tall and a metre wide. We hung pieces of concrete underlay over the windows to block out the daylight. Two scenes in particular needed complete darkness. Unfortunately the heat became intolerable during one afternoon show and we had to leave the doors open, which let in huge amounts of bright sunlight and rather spoiled the effect, but it was that or have bodies in the audience as well as on stage!

I learned a lot about directing (chiefly about what not to do), but together the cast, crew and I managed to put on a show that left a smile on peoples’ faces. There was much laughter, and even a few “magic moments”.