As described in another post, I use Firefox profiles to keep various activities separate – different banks, different AWS accounts and so on. It’s easy enough to use them from the command line, but it is much nicer to just click on an icon and have the right profile start up. Here is how to do that for one window manager, Ubuntu’s Unity.

Note that this is for Ubuntu 16.04 LTS. The instructions will probably work fine for later versions, but YMMV as they say.

What we are going to do is:

You will be then able to start Firefox with the desired profile by selecting it via the icon in the Launcher.

You can do this in Nautilus, or the file manager of your choice, or on the command line in a  terminal window. Copy this file:

2: Add Firefox to the Launcher

You can skip this step if you already have Firefox in your Launcher. Otherwise: 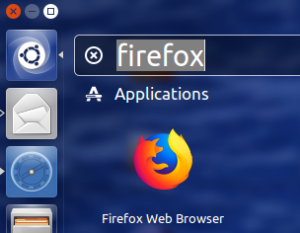 There should now be a Firefox icon in your Launcher.

If you middle-click the Firefox icon in the Launcher, you should get a new Firefox window.

If you right-click the icon, you should see a context menu drop down. It will look something like this (if you have Firefox open,there will be a “Quit” option too): 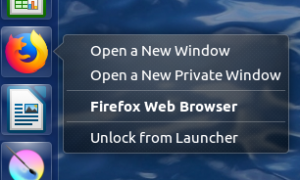 To do this, check out this blog post. Come back here when you are done.

You will need the name of your new profile. For the purposes of this blog post we will pretend that your profile’s name is “My Profile”, but you should substitute your profile’s actual name wherever needed.

4: Add an entry to the desktop file.

Remember that you will be editing your local copy of the default desktop file.

Use your favourite text editor – such as gedit – to open and edit this file:

Search for a line that begins with “Actions=“.

Choose a “tag” for your new profile. To avoid difficulty, I suggest that the tag be the profile name in lower case and with all spaces and special characters removed. For example, “My Profile” would become “myprofile”.

so you would change it to this:

Make sure the tags stay separated by semi-colons (“;”).

The entries in the context menu will be presented in the same order as the entries in the “Actions” line – so put your tag in the in the actions list at the same position as you would like your entry to appear in the menu. Only the default entry, “Unlock from Launcher” and “Quit” have fixed positions.

Add a blank line, then these lines, to the end of the file:

The “Name=” value is what will appear in the menu. It can be anything you like, though the menu will not display leading or trailing spaces.

Finally, save the file and close the editor.

5: Start Firefox with your new profile – from the Launcher

Right click on the Firefox icon in the Launcher. You should see that the menu now has a new entry representing your profile: 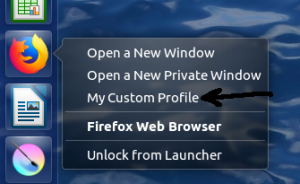 Click on the new entry, and Firefox will start with your new profile.

The above technique can be used for more than just profiles. For example, you can have entries that take you straight to a particular URL to save you clicking on a bookmark. Check out the --new-window and --new-tab Firefox options for this.

You don’t even have to start Firefox! You can start any program you like via the “Exec=” line, but it might get a bit confusing if you start Chrome from the Firefox icon…